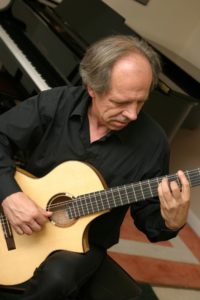 J. Stephen Dydo is a graduate of Columbia University. A composer of more than fifty pieces, his music has been performed by both chamber groups and orchestras in the United States and abroad. Amongst the most notable performers of his compositions are the Gregg Smith Singers, Stitching Combinatie van Utrechtse Muziekbelangen, New Calliope Singers, Group for Contemporary Music, and the New Jersey Percussion Ensemble.

Dr. Dydo continues to work as a freelance guitarist and conductor, performing in various national venues with the Gregg Smith Singers, the Group for Contemporary Music, and the New Jersey Percussion Ensemble. A founding member of the Composers’ Ensemble, he has lectured nationally regarding his participation in the group. Dr. Dydo is the recipient of such prestigious grants and awards as the Fulbright Research Grant, the American Music Center grant, the National Endowment for the Arts grant, the Johnson Composers’ Conference grant, the Joseph Bearns Prize, and the BMI Young Composers’ Award.

After graduating from Manhattan School of Music in 1995, Ethan Mann quickly established his reputation as a bandleader on the New York scene. His group has appeared at Birdland, Iridium, Zinc Bar, 55 Bar, and Detour.

Mr. Mann’s debut CD, Central Park North, was reviewed for Jazz Improv Magazine by Ernie Pugliese who wrote. “Central Park North is a refreshing offering from a standout young guitarist and composer. “Mann has also appeared as a sideman on a number of recordings, most recently Leave It To Luther of Luther Thomas.

Mr. Mann maintains a busy performance schedule. In January 2005 he toured Japan with singer Mari Watanabe. In May 2005, he was a guest artist at Muniak Jazz Club in Krakow. Mann has been teaching guitar at the Crestwood Music Education Center for a number of years and has developed a patient yet motivational approach.

Bassist and composer Daniel Ori’s interest in jazz music brought him to the Rimon School of Music, where he majored in jazz performance. Daniel has since collaborated with some of Israel’s foremost jazz prospects and founded the quartet, Fourword.

In December 2005, the Fourword Quartet released its debut album, Money. The group has been performing throughout Israel’s top jazz venues and festivals since the summer of 2004, including the recent Red Sea Jazz Festival in Eilat. Money features four of Mr. Ori’s original compositions, demonstrating deep groove with soulful melodies.

In 2006, Mr. Ori received a scholarship to continue his studies at the Berklee School of Music where he worked with world-class musicians Matthew Garrison, Dave Samuels, Alain Mallet, John Lockwood, and others. Upon completing his degree in contemporary composition and production, Mr. Ori is busy playing, composing, producing, and teaching in the New York City area.

A 2009 ASCAP Jazz Composers’ Award Winner, Mr. Ori has recently finished recording his debut solo album, So It Goes, soon to be released.

Keita Fukushima began studying violin using the Suzuki Method, meeting Dr. Suzuki himself every spring and summer at the Grand Children’s Concert. At the age of twelve, he won first prize at the 40th All-Japan Music Competition and appeared as a soloist with the Tokyo Symphony.

Mr. Fukushima has participated an performed in various music festivals, including the International Academy in Nice, the Music Session in Holland, the Mozarteum in Salzburg, and the Bowdoin Festival in Maine. He was invited to play in the master classes of Ruggero Ricci, Zakhar Bron, Dorothy DeLay, Herman Krebbers, Eduard Schmeider, and many others. Mr. Fukushima received his Bachelor’s and Master’s degrees from the Juilliard School.

In 2000, Mr. Fukushima won the 28th Artists International Audition in New York City, receiving the Young Artists’ Award for violin. The following year, he gave his New York debut at Carnegie’s Weill Recital Hall. He played in the Erie Philharmonic and the Eric Chamber Orchestra from 2003 through 2008 and served on the faculty at the Edinboro University Community Music School in Pennsylvania from 2004 to 2009. He has played recitals and concerts in Japan, Europe, and the United States, and has been a violin faculty member at Campus Orchestrale dell’Associazione il Palcoscenico in Italy since 2008. His former violin teachers include Chikashi Tanaka, Kazuki Sawa, Muneko Otani, and Lewis Kaplan

Tomas Janzon graduated from The Royal Conservatory in Stockholm with a Master degree in Music Education and earned a Master Degree with honors in Classical Guitar Performance at USC Thornton School of Music. Teaching experience includes colleges, high schools, and private students from beginning to doctorate level. Tomas Janzon has also conducted clinics in the US, Canada, Argentina, Brazil, Norway, and Sweden. He is an international recording jazz artist and he performs classical solo guitar recitals. He is also a composer, arranger and is a published author in several music publications.

A violinist and violist was for 25 years a member of the Philharmonia Virtuosi Chamber Orchestra and is currently a member of The Santa Fe Opera Orchestra and the Santa Fe Concert Association. She has participated in numerous concert tours of Japan and North America and has played on dozens of recordings with EOS, Philharmonia Virtuosi, and The American Symphony Orchestra. Mrs. Rood was formerly a member of the Goldovsky Opera Company, performing in over 70 American cities. Her recording of Copland and Barber with the Atlantic Symphonietta was nominated for a Grammy Award.
An experienced and passionate teacher, Mrs. Rood has had many of her students win places in All-State and All-County orchestras, as well as receive the highest scores in NYSSMA auditions.
Mrs. Rood emphasizes the importance of good form, freedom of movement and expression, tone production, and rhythm accuracy. At the same time, she strives to instill the joy of music in each and every student.

Mike Rood is a guitarist, composer, and educator based in New York. Mike grew up in Westchester in a family of professional musicians, always immersed in music, performing in dozens of recitals, concerts, and competitions. Mike received his Bachelor’s Degree in Music Performance from The New School for Jazz and Contemporary Music, and his Master’s Degree in Music Performance from NYU. Soon after, Mike released his debut album of original music, The Desert and the City, to international acclaim, hailed as “one of the best and brightest of the new generation” and “a current master” with “a wonderfully fresh approach to the guitar” and “an ambitious and unique musical vision” (All About Jazz, HiFi Magazine, Just Jazz Guitar).

Mike has had the opportunity to perform with musicians such as John Patitucci, Drew Gress, Rogerio Boccato, Ben van Gelder, Colin Stranahan, Rick Rosato, Glenn Zaleski, Kenny Grohowski, Jerad Lippi, Sam Minaie, Arthur Hnatek, and Camila Meza. Mike had his national television debut at the age of 15 and has performed his music throughout the United States at venues such as Avery Fisher Hall, Carnegie Hall, Bruno Walter Auditorium, Steinway Hall, Iridium Jazz Club, Bar Next Door at La Lanterna, Smalls Jazz Club, and Fat Cat. Mike also performed with his group at the Bern International Jazz Festival in Switzerland and toured Costa Rica with his guitar/cello duo with cellist Danielle Cho. In 2015, Mike performed with film composer Danny Elfman and the Philharmonia Orchestra of New York in Lincoln Center Festival’s “Music of Danny Elfman in the Films of Tim Burton” at Avery Fisher Hall and Live at Lincoln Center Broadcast on PBS.

As a music educator, Mike taught at NYU for two years as an Adjunct Professor, and has also taught at McGill University (Montreal, Canada), Hoff Barthelson Music School (Scarsdale, NY), and The Convent of the Sacred Heart (Greenwich, CT). Mike continues to perform and teach throughout the United States and around the world.

Cellist Ben Capps enjoys a versatile performing career as a soloist and chamber musician. His artistry has been praised as “most appealing” by the New York Times, “virtuosic and impassioned” by the Barre Montpelier Times. Most recently Capps has appeared in recital at the National Gallery of Art, the Washington National Cathedral, Rockport Music and has had chamber music appearances at the American University, Manchester Music Festival, and throughout Greece, Spain, and Italy. Recent highlights also include unaccompanied tours in the Midwest (USA) & throughout Vermont, solo recitals in NYC and surrounding areas, Chicago, Athens, Fujian in China and throughout South Africa.

Capps was featured on Vermont Public Radio and in concert performing the complete cello sonatas of Beethoven, Mendelssohn & Brahms. He is a frequent collaborator with pianist Vassily Primakov – Capps and Primakov can be heard on LP Classics, an innovative record label. He can also be heard as soloist on Innova Records and Tzadik Records.

A native of NYC, Capps holds degrees from the Manhattan School of Music, New England Conservatory and Juilliard – where he served as teaching assistant to David Soyer and Bonnie Hampton. Capps is cello professor at Hunter College in NYC, where he makes his home with his wife and dog.  http://www.BenCapps.com

Lubima Kalinkova-Shentov is a professional double bass player.
In the past twenty-five years, she has performed solo recitals and chamber music concerts in France, Germany, Bulgaria, Romania, Italy and the United States. Lubima Shentov has performed with numerous orchestras throughout the United States and Europe. She has appeared with orchestras and chamber music groups in Carnegie Hall, Alice Tully Hall, Avery Fisher Hall, Bruno Walter Auditorium, Paul Hall, Morse Hall, George Enescu Hall and The Art Museum in Bucharest, Romania, The Palace of Culture and Bulgaria Hall in Sofia, Bulgaria. She has performed for the Mayor of Paris and the President of Bulgaria.

She holds a Master of Music degree from The Juilliard School, Master of Arts from the Academy of Music, Bucharest, Romania. In the past fifteen years, Lubima Kalinkova-Shentov thought double bass, violoncello, chamber music, string ensemble classes, music theory, and music history. She is presently The String Orchestra Director of Tuckahoe Schools. Since 2002, Lubima has thought double bass and string ensemble at The Music Advancement Program at The Juilliard School. Many of her students are following professional music careers. Currently, she is a faculty member at The Westchester Conservatory and the Crestwood Music Center.

Ms. Normearleasa Thomas is a professional cellist performing in Italy during the summer at the Assisi Music Festival in Assis, Italy and the Italian Chamber Music Conference in Naples, Italy, performing in ensembles with members of the Paris Conservatory of Music. Ms. Thomas plays cello in New York City with The Broadway Bach Symphony, Alaria Chamber performing at the National Opera Center, and St. Thomas Symphony Orchestra.  Previous concerts have been with the Columbia University Symphony Orchestra, Princeton Symphony, Ridgewood Symphony and Bennington Chamber Music Conference of the East in Vermont.

Ms. Thomas is currently the Orchestra Director and Instructor of Strings at the Performing & Visual Arts Magnet School in Mount Vernon, N.Y. She is a graduate of Music and Art High School and attended the Boston Conservatory of Music and Manhattan School of Music Prep as a cello major. Ms. Thomas attended Nyack College and achieved her Bachelor of Arts in Music Education and later graduated from Teachers College, Columbia University with her Masters in Music Education. Ms. Thomas earned a 2nd Masters in Educational Leadership which allowed her to became an assistant principal and chairperson of the Department of Music for Mt Vernon City Schools. Ms. Thomas is presently pursuing a Doctorate of Musical Arts degree from the Mason Gross School of Music of Rutgers University.